What, are we crazy? Indeed we are, and I’m not using the royal “we.” Kirk has been making whole wheat bread– dark, thick, heavy loaves, looking like something that formed themselves deep in the middle of the Black Forest; when I smell it rising, I always picture a gang of raucous schuhplattlers sitting around the kitchen table, demanding beer and sausage.

I see what passes for bread in the stores these days, and there is really no excuse for not baking your own at home. Well, there might be good excuses, possibly even very good ones, but to voice them would be un-American and Communistic, not to mention Socialist. You can get good breads at some grocery store bakeries, but still… there’s nothing to equal the satisfaction of watching your loaf rise atop the kitchen stove in the middle of a quiet summer afternoon.

I like to make the giant Olive Oil Bread that Martha Stewart features in her Baking Handbook. It’s actually fun to make. It takes you through THREE rises, and at one point before the third you have to twist the somewhat sticky pile of dough into a tight ball.  Then you slice a square into the top surface so that it expands while baking. You slide it off a wooden peel onto a baking stone that’s heating up in the oven, and soon you have this immense, crusty loaf of fluffy bread that tastes of olive oil. There’s nothing like it!

I made a loaf of it last night, and by 9 PM three of us were devouring it and fainting onto the kitchen floor because it’s so good– especially with just a little warm butter.

Highly recommended. It’s on page 293 of Martha’s book, and I’m not getting any compensation for suggesting it. She doesn’t know me from Adam, but she should.

This is my favorite house in Key West. It had been in the Albury family since being built in the 1800s. The house’s last occupant, Bonnie Albury,  died in 2007. I had the privilege of being glared at by her once while strolling past the house. The place is now up for sale… and needs a lot of work, most notably on the exterior. It needed attention when I first saw it in 1985, and it needs even more now. But it’s beautiful– its ancient Key West soul glows.

And here’s a resident’s blog about Bonnie, and her life in Key West.

She was quite a character!

Maybe I’m one of the strange men she called the police about over the years? 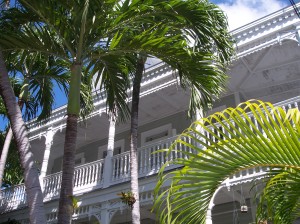 Well! How nice to know that some of you have been wondering whether or not I’d fallen off the face of the earth, slipped through the surrounding ether, and ended up in some nebulous, hazy, far away Neverland. Actually, I did– we were in Key West for a few days after Kirk decided he needed to get away somewhere for his oddly-placed August vacation. His employers choose this slow time of year to close the store for a couple of weeks, and so there you have it. Also, I decided I would make this a working vacation and gather notes and take photos for articles that I could write and then shop for publication. It’s what I do best,and ultimately what I want to do forever.

The secret to weathering August in Key West is to travel, and dress, as lightly as possible. Make sure the guest house doesn’t require that you dress for dinner– or swimming, or sunning– and that it has soothing swimming pools placed every few yards or so. The guests shouldn’t have to suffer while walking on paths that have been baking in the sun, you know?

We stayed at Coconut Grove, our first time there, and were extremely pleased with the amenities, the staff, the rates, and the other guests. We basked; we imbibed; we swam; and we relaxed. Kirk, mostly– me, not so much, as I have been relaxing for a number of months now. Well, not really. There are the yards to tend to, and the house painting and the installation of miles and miles and MILES of baseboards, and all manner of sorting and cleaning and tossing out and organization. Plus laundry. And day-job hunting.

Coconut Grove is part of a triplex of guest houses that share their facilities. Coconut Grove is next door to Oasis– aka “Onassis–” and you are able to wander freely from one to the next.  Coral Tree is across the street, though I didn’t get that far. Once you’re settled in the pool or onto a chaise longue or at a table in the shade, that’s it for a few hours. The cocktails make their rounds, and out come the stories, and the laughter.

You don’t spend all your time at the guest house, of course. You need to go out and explore, and I don’t mean going out on a foray to buy a tschotke on Duval Street. You could spend your entire time in Key West on Duval Street, where most of the tourist restaurants and tee shirt shops and many galleries are located, and I do recommend one stroll down its length, but by no means should you consider it home base. There’s so much else to see, and the best way to do this is by walking or biking. Forego the scooters and the pedal-cars; they annoy me, and you’re going too fast to appreciate the little secrets surrounding you on every side.

This is all I would need.

Even after a couple of dozen trips to Key West, there is still so much to discover. (I always wonder about the travelers who grow bored after three days; they vow to escape to Miami, and so I say “see ya,” because that means that I’ll have to put up with fewer noisy scooters and mis-propelled pedal cars.) One thing I love to do is walk through the back streets of town at night; I always say that all you can hear are the people reading quietly in their houses. Early Sunday mornings are peaceful, too; you get to see the shopkeepers hosing the detritus from the previous night’s bacchanal off their sidewalks: confetti, regurgitated daiquiris in rainbow colors, the occasional drag queen…

This year, since we’re on a budget, we brought sandwiches and drinks and lunched in the room; the free breakfast at the guest house tided us over until then. The 6 PM happy hour included lots of cocktail foods, which helped prevent us from gorging at dinner later on. But we went to Pepe’s one night, and Flamingo’s for lunch one day, and Kirk went to Harpoon Harry’s diner one day with friends. I especially love Flamingo’s. The owners make it feel like you’re having breakfast in their own kitchen and the food takes like a fresh morning placed onto your plate. Through the windows you can see the passing crowd, but silently. 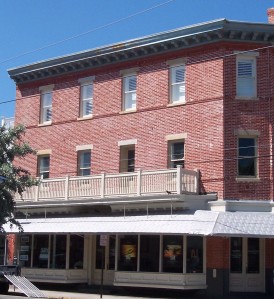 I've always loved this little building. I can easily imagine us living on the top floor, tending orchids and writing stories. 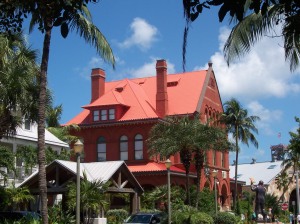 The Custom House, now the Museum of Art and History.

That’s Sister Mary Louis Gabriel, a paragon of virtue and service, and “a lamp of faith.”  (Which I first read as  “a lump of faith.”)  It was she who engineered the construction of a grotto to Mary, Star of the Sea, on the convent grounds in 1922.  “As long as the grotto stands, Key West will never again experience the full brunt of a hurricane,” she decreed. So far she’s been right. The grounds were also the site of a grand convent, begun in 1875,  which was pulled down in the 1960s due to termite damage, causing a great stir in town.

Me, trying to look like all those carefree guys in the Key West brochures. They’ve always got their mouths hanging open in glee. And look at the sky– the impending sunset arranged itself into a simulacrum of the French tricolor, even though I am about as French as Rosie O’Donnell. This is WAY up on deck, a height I am not too familiar with, and so I am clutching pearls.

Sunset from atop the guest house deck. 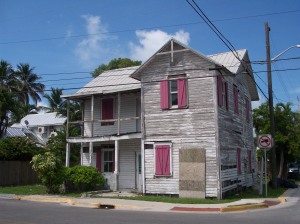 I love this house in Bahama Village (the town's historically African-American west side).

As you know, I love ecclesiastical architecture– and the more stained glass, the better. Not for me your plain interiors ! This is a shot inside the Southernmost Prayer and Faith Center Church, which started out as the Fleming Street Methodist Church when it was built in 1912. There’s even a set of paintings depicting the stations of the cross inside this church– that’s  SO Catholic– rendering this magnificent building into something ecumenical. And everybody loves a tambourine! 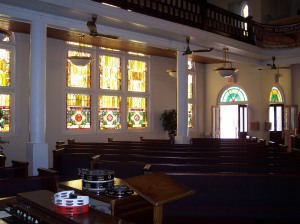 Here’s a young Mom approaching Duval Street wearing something more appropriate to the hotel pool, or possibly to the club known as Teasers. And she’s probably the first one to complain when she finds a hair in her latte. 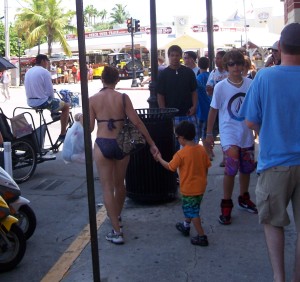 Here’s someone canoeing (kayaking?) just west of the White Street pier. He looks so content in this shot, but what you can’t see is how fast he was going. What was the hurry, I wanted to ask him. Maybe he was on his way to Cuba, which is less than a hundred miles away.

Here’s the view from atop the Coconut Grove guest house. It’s near dinner time, so everybody has vacated the premises and stampeded downtown. It’s kind of nice to have the entire place to yourself for a bit, until everyone stampedes back, drunk, doing their impressions of Kathy Griffin’s most recent stage show (the younger guys), or Bette Davis flipping her hair back (the older guys). 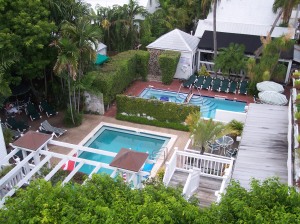 Here is part of Fort Zachary Taylor; ruins like these fascinate me, and I want to go clambering. I don’t think you’re allowed. Besides, Kirk was with me, and he’s always afraid that I’ll get picked up by the cops and then deported. Sometimes you can see goats on these brick pilings, idly working away at the grass.

Here’s me in front of a coast guard cutter parked (docked?) at the Fort. For one small second I considered a career in the military… and then the feeling passed. Sir yes sir! 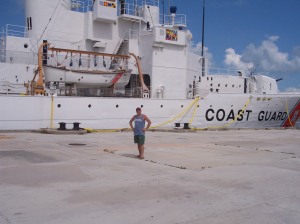 At the Key West cemetery… you know, with a little remodeling and air conditioning, I could move in here. I wouldn’t add a swimming pool, though… 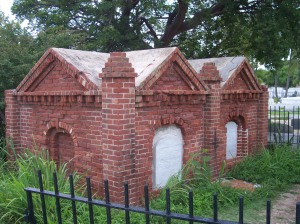 And here are some swatches of local color. One of my favorite things to do is get on the bicycle and cruise lazily through town, looking for colorful details. And all these were taken within just a few small blocks.

I can’t wait to go back, and it can’t be soon enough. My second cousin (once removed) is coming for a visit from Italy in September, and I’ve been asking him what he’d like to see in Florida. “That big bridge that goes over the water,” he says, and I assume he means the Seven Mile Bridge that skims across the water south of Marathon in the Keys.

I sure hope he doesn’t mean the Sunshine Skyway over in Tampa Bay.