I was fixated on them as a kid in the early 1960s, along with just about every other kid in America. Some of my earliest memories involve dinosaurs. My dad would take me to the McKinley Park library branch and I would run over into the adult section because they had really old science books that showed great pictures of dinosaurs, all labeled: ankylosaurus, brontosaurus, diplodocus, stegosaurus, tyrannosaurus rex… I was fascinated. These giant things once prowled the planet, and the earth actually SHOOK when they walked, the rumble made by their huge, heavy feet stamping on the ground  sounding like approaching thunder… It was incredible to me that there were things THIS BIG that had all eventually disappeared.

The book above was given to me by my Uncle John, who often brought me books. (Senior 63 was something I wrote on the cover myself,  which was the year he graduated from Fort Hamilton High School. I copied everything he did, actually. On a third grade notebook of mine I wrote “I love Sharon” in bubble letters because Uncle John had written similar sentiments on HIS notebooks. A substitute nun saw my paean one day and gave me hell, along with a swat on the bottom. Thank you, Sister Gonzaga, whose name sounded like a dinosaur, so there ya go.) The book had great you-are-there appeal:

“With his teeth and claws, the killer tears the flesh from the Duckbill. He gulps it in huge chunks. At the end of an hour, half the skeleton lies bare. The killer’s stomach is full. Slowly the great dinosaur walks to the jungle. There he stretches out beneath a palm tree. For several days he sleeps soundly. No other dinosaur dares to bother him. Then Tyrannosaurus wakes up, hungry again. He goes forth to make another kill. That is his life- killing, eating, and sleeping.”

Dad signed us up for an art class at Brooklyn College about that time, and in our group was one of those kids whose parents doted on him and fueled his fantasies: they were his supporting cast. I remember being GREEN with envy because they were letting him build a dinosaur diorama in their basement.

I  had a little bag of plastic dinosaurs in pastel colors that I would arrange in the backyard underneath the tomato plants and rosebushes. Right there in Brooklyn, way before Spielberg,  I established the original Jurassic Park.

And then you grow up.

And then it’s June 2014 and you decide it’s high time you visited Dinosaur World over in Orlampa. Yes, Orlampa. There is actually a sign on Interstate 4 which refers to the region between Orlando and Tampa as Orlampa, which sounds more like a disease of the lymph nodes. “Yeah, we’re going to the rehab place and bringing her some kale. They say kale is good for orlampa. You wanna come with us” “No thanks.”

You’ve possibly been to Dinosaur World, but you’ve definitely sped past it while driving through Orlampa. You saw the dinosaurs by the side of the road, and probably said “We should go there.” Very few of you have, judging by the people who were there today,  who were people that I probably have not spent a lot of time with in my life. (Ya get the pictcha? Yes, we see.) Let’s just say there were some Boy Scout leaders with their groups, women with coal miner’s daughter hairdos, and lots of little kids named Amber and Winchester. But you know what? I talk to anyone and interact with everyone, so it was fine. I immerse myself in these situations, sort of like the Dorothy Malone character in those Frankie and Annette beach movies: to observe.

Herewith, a series of photographs destined to thrill, enchant, terrify, and amuse you.

Something-o’-saureses at the entrance to Dinosaur World. Hadrosaurs? I always liked the little things perched atop their bony skulls. The literature always mentions the “tiny brains” of these creatures, kind of implying that they were too stupid to last more than a few million years. 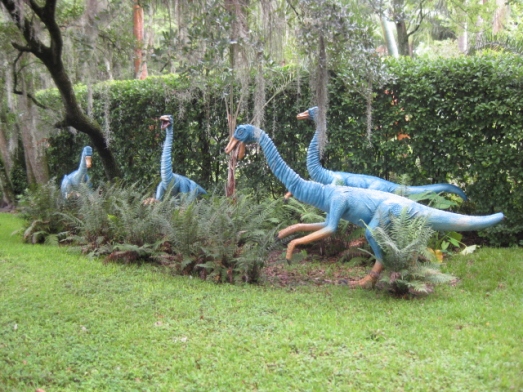 Raptors? Possibly. Imagine leaving your tent at four in the morning (a time, between you and me, which is neither here nor there) and seeing a few of these watching while you free yourself, seeking relief? (Ladies, I don’t even want to imagine what you might experience.)

In a cave you will find this tiny card delineating the History of the World; the fan is situated so that you might find respite from the  sweat that breaks out when you realize we are doomed.

Imagine finding this in the toilet late at night? I’m just saying. ALWAYS check before sitting down!

Here are two something-o’-saureses fighting. Remember those dinosaur movies you used to watch on late afternoon TV instead of doing your homework? They always featured two dinosaurs fighting. There would be screams, loud groans, and, eventually, one would tumble into a crack in the earth when the inevitable earthquake occurred complete with lave-spewing volcanoes. This stock footage appeared in just about every dinosaur movie of the 1950s. Remember The Giant Behemoth? At one point a group of Londoners boarded a ferry, a little girl and her doll among them. Bronto appears… ferry is capsized… smash cut to doll floating in Thames, sans owner. I was devastated.

This fishy creature lived a lonnng time ago. Imagine schools of these still living off the Florida coast? It might mean the difference between a day spent in paradise and a day spent in the morgue should you decide to go for a swim after your continental breakfast.

Here is Kirk, Scandinavianically unaware that a dinosaur has just emerged from a nearby egg disguised as a trash receptacle.

The fine line between life and death has been explored ad infinitum in the films of Bergman. Here, the fine line is a bench.

This is the huge gift shop at Dinosaur World. After your experience, you can go crazy buying dino-related toys, gifts, tee shirts, etc. I bought a couple of dino-centric things for Blueie (my lovebird) to chew on. When I presented him with his gifts, he promptly squawked, flew around the area, crapped, and screamed in horror- which is basically what I did that day. And would I do it again? You bet!